What language do you dream in?


Little girls from different cultures who sing, shout and chant in Hebrew, and one eight year who says she dreams in Hebrew. A charming scene but these are children of migrant workers who live in a place where 'it is illegal for migrant workers to have children.' What a chilling line to read so early in the morning.

A little girl who’s never been to her mother’s land and is conscious of only a few words of its language is now facing deportation from a land whose dominant society itself suffered centuries of wandering, living beyond the pale, rootless except in their faith. Aye, aye, aye, aye, a-y-e as they say in and probably a few other places too.

The first time I visited , I heard a sound that wrapped around me like a warm blanket, bringing with it a new experience; a feeling of security. Nothing could hurt me as long as I heard the rhythms of that language, as long as I had the protection of the people who spoke it (or so I thought at the time - I was very young and the young are allowed to trust).

I so remember the sense of shock I experienced when many years later during a seminar, Professor Herman Rappaport talked about the primacy of language to our sense of being. When I asked what he thought of the denial of the mother tongue, he, multi-lingual himself, looked directly at me and said; ‘it is an act of violence’ - a moment of connection in that room.

To be allowed to own your language, your sense of being, and your culture, to belong to the land in which you live - not tolerated but truly belong - is valuable indeed. So who is being discussed here? Less clarity now around this rupture isn’t there? So I’ll leave it to Rotem Ilan, head of the Children of Israel, protesting against the children’s deportation, to summarise:

For 20 years Israeli governments have turned a blind eye to these children. They are now part of the fabric of this country. They go to school here. They celebrate the same holidays as us. If there is something we [Jews] have learned from our history is that you must not, you cannot deport children.

Primo Levy said, ‘It happened, therefore it can happen again, this is the core of what we have to say.’ And let’s remember that we’re living in reactionary times and regard what’s under our own noses.

Can the spectacular view from a space platform see this epistemic paradox that says everything is true and some things are false?

Google Earth can see this, the 2005 Holocaust memorial in : 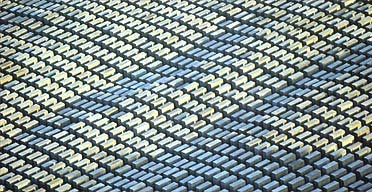 Jonathan Jones, questioning the aim of the memorial, states that ‘what needs to be explained is why memorials have grown in importance for those who have no personal reason to grieve.’

For me, this memorial is more than an appropriation of someone else's grief, it stand as a warning to us all - pity 'tis that we still need it - that something can start to happen in small and reasonable ways and, like the beginning of a hardly perceptible wave, it can wash aside our humanity with its own reasonable force, leaving us to wonder how it could have happened. The memorial's architect, Peter Eisenman, said, 'the stelae are designed to produce an uneasy, confusing atmosphere, and the whole sculpture aims to represent a supposedly ordered system that has lost touch with human reason'.