Displaced by the soft white cotton sheet, the warm air pulled into itself before releasing its soapy fragrance.  In the smell, which preceded the jolt of recognition when the sheet landed in perfect symmetry, the woman recognised a sharpness in its hard-pressed crease.  A crease confirming that its last laundering had been her dead mother’s.

Now she was preparing a bed for another mother; anxious and shortly to arrive to touch her daughter, to count her limbs, seek out her scars and look into her eyes for traces of trauma, pain, uncertainty.  The bed-making woman had wanted to prepare that bed for her own mother; look into her eyes and try to smooth traces of trauma, uncertainty, fear; to launder them away. She cried quietly, no tears falling to mar the sheet.

‘I’m never coming back, Mama’ the younger woman said later; having had her limbs counted, her eyes and scars examined.  ‘No, I know that.’ the mother acknowledged sadly.  In that acknowledgement, her face said, ‘at least my daughter let her limbs be counted, her eyes and scars examined – at least I can see for myself that she’s going to be alright.’ And as she watched her daughter’s gradual relaxation; she knew she was still needed, that she would always be needed. She knew her child.

This should Allison Moorer, Crows album recording of The Stars and I but it’s not on You Tube so have  Broken Girl

Posted by Primavera at 12:26 No comments:

Be happy. Friday's come and gone and the presentation's no nearer completion but I've done a stack of work and my chronology is finished with some interesting surprises. Now then, if I use a grey font will it make my writing lighter?  'No' says my new friend, 'it will just make it hard to read.'

... when all the admin's done,
books are read,
music,
an idle click;
whack!

Going to die, going to die?
What? what?
Choose your expletive

This will be my exit, now hastened by a few minutes

Posted by Primavera at 13:48 No comments:

I think we can make something of very little if we’re pre-disposed to as W. G. Sebald’s character is described in Austerlitz:

‘… as he talked, forming perfectly balanced sentences out of whatever occurred to him, […] and the way in which, in his mind, the passing on of his knowledge seemed to become a gradual approach to a kind of historical metaphysic, bringing remembered events back to life.’

Reducing this lofty concept to domestic banality then, let’s consider the memory and naming of colours. The bliss of my childhood paint box: burnt umber, raw umber, cobalt, sienna, dark sienna, sepia, lead white and the travels these names carried me on before the concentric circles of my life looked like reaching their limits.

So now we come to the banality of bedroom one destined for Arabian Red which ended being Summer Pudding.  Arabian Red was, of course, entirely wrong but would the name have conjured the occupant’s dreams to smell and feel coarse woven wool, dwindling smoke, freezing starlight, fat low moon rather than a dumpy pudding with a spring of mint on top in a soggy English climate? The pudding, a passing pleasure, the other, connection to a land of pain and pleasure, fear and adventure.

Bedroom two became Swedish Blue (with a hint of arsenic green) where at least, with soft white cotton voile puddling to the floor, doors flung open to the garden and a pair of eighteenth-century china dogs on guard, a sense of romanticism could be observed; given a little imagination.

Finally the entrance hall where choice wavers between Maria Theresa Yellow, Sun Yellow or Sun Dust #2 or #3.  I wish Maria Theresa’s colour bore more resemblance to the dress of La gitane by Kees van Dongen, 1910 (L’Annonciade, Musee de Saint-Tropez).   I’m afraid it’s going to be Sun Yellow that lifts us from our grey little lives.  As we admire its chalky texture, we’ll congratulate ourselves on a good choice and remember the places we still want to visit, trying very hard not to remember how little time is left.

Posted by Primavera at 10:59 No comments: 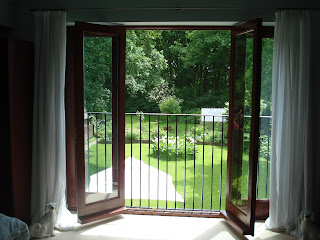 What are blogs for?  This evening it's for gratitude.  Jeff Buckley's on track 11,  sono pieno di pasta arabiata con un buon bicchiere di Chianti Riserva 2008 and the lad will be onto Hallelujah any time soon.  Tomorrow morning at 7.30 when my heart pounds louder than my running shoes I'll regret the second glass of red, red wine but not tonight.
Posted by Primavera at 20:32 No comments: