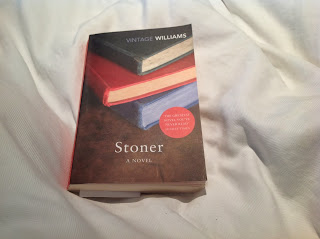 She raised her head enough to read the red digits; 5:08, before ruefully reflecting on the mistake of her early retirement the night before.  She knew, of course, that of  fifty seven pages of the current novel she had left to read, twenty would see her off before she’d finished.  Like sex, reading in bed is different in the morning.   Reaching carefully, she tapped the base of her lamp once before quietly picking up glasses and book: Stoner, A Novel.  A slight shift beside her, then her partner’s breathing regulated itself.  Good, no intrusion on his rest to suffuse her reading with guilt as, guiltily, she thought of someone else who might now be driving west, the sunrise, if it should show, behind him.  Doubtless she’d hear how tired he was if she should bump into him later.

The novel had been troubling her all weekend, as had domestic imperatives, her forthcoming academic supervision and the procrastinatory nature of her decision to conduct one of her biannual wardrobe swops.

Sunday afternoon and the novel had supplied the necessary human drama to keep the story moving: p198 - a pleasant exercise in conscious self-delusion, ‘half believed … possibility’ and dreams of perfect worlds which had power to charm whilst simultaneously depressing its readers. But Stoner had been more than that to her; both troubling and stimulating.  Read as a straightforward polemic between positivist traditionalism and new critical approaches to literature, Bill Stoner could easily be heralded against the dual ‘deformity’ of literary relativists’, Lomax/Walker, mangled views.  But as a prescient introduction to the nightmare that has become post modernism, she felt the timeliness of the novel’s re-publication and worried about her own project. The more she read, the more she was delighted by the writing but the more she recognised Charles Walker in herself; the winger about to be grounded.  Lomax, Stoner and Holland would surely find her out to be so far removed from the academically idyllic Katherine Driscoll that even her own supervisor would wear that familiar look of disappointment. And sigh. What to do?

She mulled the problem over as Williams finished off his character, perfectly pacing the meta-narrative while giving back his readers some hope; that although it’s a one-way street, and mistakes will be repeated, we’ll all find a way to make some sense of it somehow.  Even if it’s only the importance of feeling a cool breeze on the face.  No-one is all Stoner, all Lomax, all Edith or all Driscoll.  The secret, the real secret is not to risk anything at all and be Gordon Finch.  As she mused on the benefits and disadvantages of receiving a university bursary, she hoped one didn't get too much of a sore bum from sitting on the fence.

Eliza Gilkyson, not a great recording but she's looking for a place...

Posted by Primavera at 11:50 No comments:

7th September 2013, Guardian Family, a piece on her father. Usual front page story but this time I didn’t feel alienated by the middle class braggadocio of nostalgia and sentimental smugness that usually accompanies these pieces.  You know the formula: he/she was a bit of a colourful character but look at the great success I am.

This time it wasn’t me, me, me, it was accessible, no protective film, no surface tension to break through and no misery memoir either.  Despite and maybe because of this, engaged penetration was allowed.  No clunky phrases but the lightly placed horror of living with a beast and despite that a reverence towards his engagement with the world.  A recognition that a man has passed this way and left his mark.

The reading of this piece accompanied a realisation that it wasn't my class prejudice that prevented my engagement with these narratives; it was the authorial decisions that writers were taking to mask or cloud the real story.  Hidden in Evie Wyld’s narrative was the humanity that would allow any reader entry to it.  Note to self: remember to let them in.

That morning with my running buddy, married to a second generation immigrant of Polish antecedent;  I use the word deliberately because membership of some human clans can be like carrying a criminal record. His mother’s children felt unloved; never a hug, a bedtime story.  This mother-woman had been in a concentration camp at the age of five.  She wasn't  Jewish, it was a labour camp.  Survival, she learned from her own mother, was food.  Energy was not to be wasted on sport or play, it was for work.  Work was not going to set them free, but showing they were strong enough to work meant their captors still felt there was some value in keeping them alive.

The inheritance second generations receive from that type of experience is a set of material values in conflict with a culture they themselves have to negotiate.  S and his siblings always had food on the table.  His mother could feed them, thus ensuring their survival.  But she couldn't hug them. How can one judge such different experiences by contemporary standards?  That we have generations of conflicted individuals who frequently feel excluded from the experience of their peers, coupled with the fact that older generations wish to protect their children from carrying the hurt and grievances of the past, leads to fractured generations unable to relate to each other. And there's the tragedy, we have nothing to hold onto.

Remember the past but don’t become burdened by it.  Your new life is yours to make any way you choose because at least you have a choice.

Posted by Primavera at 10:33 No comments: