Today, a reflection on endings and beginnings. By chance I met my son's ex-girlfriend of four years ago; a lovely girl whose eyes betray her hurt feelings still despite her assurances that she's happy. And my own girl, loveless too long has ended a relationship that put pain in her beautiful face. Ah me, what it is to be young, and not so young. How we yearn for love, to love and to be loved in return.

As we age we take on more and more people, we learn to love and cherish them, especially the ones who come from outside to love our children. It is the hope that after we are gone there will be someone special. But they have to be able to dance, laugh and live, they really do.

The Greek father calls his son a couple of days before Christmas and says, "Niko, I hate to ruin your day, but I must tell you that your mother and I are divorcing - forty-five years of misery is enough."

"Mba mba, what are you talking about?" Niko screams.
"We can't stand the sight of each other any longer, We're sick of each other, and I'm sick of talking about this, so you call your sister Toula and let her know."

Frantic, the son calls Toula, who explodes on the phone."No way are my loving parents getting divorced!" she shouts.

She calls Dad immediately and screams - - "Patera, you are not getting divorced! Don't do anything until we get there. I'm calling Niko back and we'll be there tomorrow. Do you hear me?" and hangs up.

The old man hangs up his phone and turns to his wife. "Endaxi,"
he says,"they're coming home for Christmas and paying their own way."

Posted by Primavera at 15:39 No comments:

Bring it on
Posted by Primavera at 09:23 No comments:

Today is a down day - only scored 41% on Moodscope. So there you are, it's official, I don't have to try to be upbeat because it's a 41% day. Apparently on these days one is supposed to contact friends to let them know so they can be supportive. Hmm, I have a finding for this mood management technique.

All alone in the office, facing the prospect of diminishing job satisfaction without my long-term colleagues and a dearth of interesting stuff to do so off to the Oxfam bookshop. What should I happen upon on my 41% day but The Bell Jar - irresistible. But the best part is the inscription written inside it:

love G '82
(well not that sort of love
more a kind of creeping attachment
to your personality actually. And
almost definitely a reaction to
recent events).

If that don't make you smile! And wonder. Enough to amend a 41% score.

Tomorrow evening NT Live is screening Minghella's Madama Butterfly at the Met and I'm going to see it with Ruth. So there can only one choice of music, yes? Ah yes, personality will do it every time.

Posted by Primavera at 14:48 No comments: 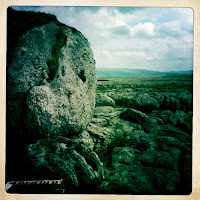 Death was waiting for us on the platform at Ribblehead Station. Well actually it was Mikhail who sang so beautifully and looked so cool in the evening sun that he must be without sin because he’d be so very, very, easy to forgive.
And so began an interesting journey that took us to artistic interventions in Ribblehead Quarry on Friday evening, across 12 miles of Yorkshire dale on Saturday, culminating with our assent of Ingleborough at 7.00am Sunday morning in 50mph winds. The idea was that by Sunday we’d be vulnerable - and vulnerable we were. Hectored by mountain rangers to stay down we huddled like a penguin colony against the wind, grinning and gurning at each other (depending on our skin’s elasticity – work it out) in amazement that we’d made it.

During the assent two ideas came to me: firstly that we were bodies in extremis - well as much as it was possible for a bunch of middle class wannabes to be – and secondly that this is what some people actually had to do to escape a grim fate.

To feel oneself tried to the limit of endurance but have to carry on alters the focus of preservation from the other to the self. What better illustration to show what happens at the immanent end of life, when all other considerations are irrelevant, that we are drawn upon our own resources and instincts for life, for the will, to continue? We find what we need, what has worked for us in the past, and we use it. We use it all.

The second consideration was in applying this idea to people who are in the process of escaping malfeasance of some kind. I remember hearing of stories gleaned from refugee women who were asked to bring objects of significance to a museum focus group (how to make British museums relevant to ethnic minority groups). One story tells of a woman who brought a humble cooking pot. She carried it over the mountains in deep winter, heavy in her pack and it’s been close by her ever since. Why? Because it belonged to her grandmother and to one of her earliest memories, it symbolised everything she lost in her flight for life. Her grandmother’s hearth, her love, her homeland. A simple pot that cooked food to nourish a family, to grow them strong, to help them work the land, to make more food, to nourish a family, to grow them strong…

What euphoria was shared with our fellow travelers in that descent from Ingleborough – that we were always going to be safe was never really in doubt. The mountain rangers like sheep dogs invested in our protection and we, like sheep, allowed it, happy for someone to be in charge. The euphoria came from knowing that in gamba sono ancora. Our boys and men were safe, our homes were still ours, our cooking pots weren't wanted because our families were fed, nourished, thriving and there’d be hot food for us at base camp, smiles and congratulations.

Posted by Primavera at 11:51 No comments: 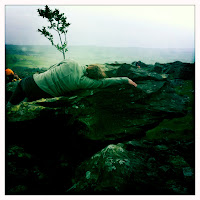 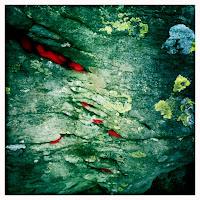 In the wind, hands reaching out, pulling in. The wind so strong. At night, in a dream, in the dark a hand reaches out. The night so dark.
As long as there are hands that reach out there is hope. Sometimes that's all we can do.
And all the while this song going around in my head....
Posted by Primavera at 20:51 No comments: