It is not wrong in time

Already I know this. I know that is to do with trash and shit, and that it is wrong in time. Time's Arrow

What base connections create a little narrative here today between Will Self, Martin Amis and Samuel Taylor Coleridge. Actually Will Self only got in there by the skin of his teeth as he perpetuated a theme that started on the 11 June post but which has exercised my mind frequently since then.

If only STC had had the benefit of Movicol, Lactulose and Normacol, he may have been more moved by nature. But then he would dabble with the opiates so what could he expect? Will Self? Well, he appeared on television recently talking about how extraordinary is our attitude to bodily function and how we really ought to eat in private as, inevitably, it is a process that ends the same for all of us.

There's a window in my house that looks out at nothing now but used to be a little toilet so to solve a problem, by making it an architectural feature, it's now a stained glass window, casting small pools of colour into the hall. Trapped in the fused glass are allegorical symbols for each member of the family. Quaint, sentimental, but the worst of sentimentality to fix people in a point in time. So to ameliorate the offence, there is etched the following:

And think that thou shalt learn far other lore
And in far other scenes!

For the people who matter, time and shit passes, eventually.

Posted by Primavera at 08:59 No comments: 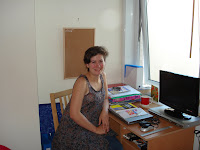 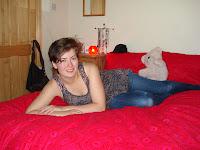 Francesco Napoli II and his 10 Tornesi 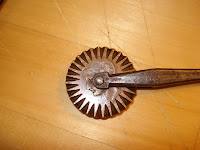 A low denomination coin from 1856, the Kingdom of the Two Scicilies, produces a commonplace Italian kitchen utensil, cheaply bought and passed from mother to daughter, but not before it takes on the power of loss...

It’s not cooked yet

It doesn’t have a purpose

Posted by Primavera at 18:05 No comments: