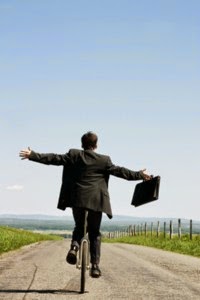 Two years, six weeks and five days, two years, six weeks and five days. This is how she counted the time he'd been gone. She counted between town and countryside, by mountains and by the sea. Between rising at noon and sleeping at the zenith of the moon. As she sewed sparkling tulle, as she painted pretty faces.  Her counting became a part of her. As ropes were coiled and sawdust swept.     No wall or steps escaped; she counted them all.  Counting became the thing that knit her together as her stitches unraveled around her.

And now he was returning to the only life she'd ever known.  The boy who ran away from the circus to become an accountant.  Coming home on a unicycle, that was what hurt the most.

Good luck Thea
Posted by Primavera at 09:33 No comments: