This is the moment before the moment. Gamblers have a name for it: 'tilt'. That time when the cards are good, there's money in the pot and the wise and sensible player knows how to bid; what to throw, what to keep, how to win. And then?

And then they sabotage themselves. Freud says it's because of our inner divisions, that I know. What I don't know is whether, in this moment before the moment, I will understand the implications of the 'tilt' I am about to make, or even care. It really doesn't matter if I'm 'tilting' at windmills, it really doesn't matter. Rather tilt at the windmill of your own making than that of others'

Ten years or so ago, I held some cards and played them; then - a wise and sensible player - but now? Well now the world is changing, some change invited, some not, some on a global scale, some domestic. Whichever it is, the gods hold up a mirror to us and say, 'Well? what are you going to do now, you little people?'

Tomorrow afternoon a group of decent, intelligent, hardworking people will gather to be told their fate, the day after tomorrow I will decide my own.

There can really only be one track, and one singer...

Posted by Primavera at 10:18 No comments: 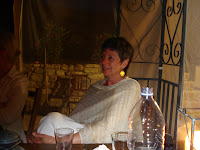 There are big things cooking in the kitchen; a real banquet with birds stuffed into birds, bright rosy apples trapped by roast suckling pigs competing for attention with the stuffed peaock. Not to mention the sauces, sweetmeats and gold covered pastries.

Oh but my diners will face such challenges and indigestion that, frankly, it wouldn't be a gift of food would it? It would be a great big fat, in your face, 'look I've sweated over this so you're bloody well going to eat it and digest it, if it kills you' arrogance.

Whereas, some olives, good strong bread, oozy cheese, maybe warm, ripe tomatoes and sharp/sweet grapes. Oh! and a zingy wine, almost as green as the vines growing overhead. That's a meal that says, 'sit with me, eat with me, let us drink a little wine and pick at the grapes while we talk and laugh at our follies'. That's the one to write.

Posted by Primavera at 11:49 No comments:

'She went back to him and a little more of her died each and every time he hurt her again.' Oh how we sighed over that one. 'Yes, yes' we said, 'that's how it is'. Can't remember where it came from, something big at the time like The Thorn Birds but it wasn't. Garish, gold covered book I think. Anyway, it passed from female hand to female hand and served to reinforce our victimhood. Ah, those were the days, the endless days, the helpless days, believe me.

Something like forty years later reading Saul Bellow's The Victim; does my heart ache for victims? Not sure it does when we could have invested our puerile energies into listening to the Kink's version of those endless Days and written a different narrative for ourselves. Sung here by Kirsty McColl.

Posted by Primavera at 15:02 No comments: