Sock it to the New Year

Many years ago, when I was an aspirational mother, organising the family's laundry was one of my finest achievements.  Through my labour I could show the world (or the very very small part of it I mentally inhabited) that I was successfully in control.

When my first baby came (she just came, just like that) I held a very Catholic state of mind. She was pure and unstained, and must remain so for a long as possible.  Therefore I dressed her all in white so that I could notice any little mark on her. That child was held from the world's corruption until it was no longer reasonable (or practical) to continue - about six weeks.  Come on, it takes a lot of effort to keep a white-clad baby spotless. Anyway, in the early days, the child's nightgowns and babygros (yes, really - there had to be a difference between day and night - how else would she know it was bedtime?) were hand-washed nightly at the kitchen sink; often by an exhausted weeping mother resisting her husband's appeals for common-sense.

I did not iron socks, underpants, fitted sheets or towels. I did iron duvet covers and pillowcases.  There is something sublimely appealing in wafting a crisply ironed duvet cover over a clean sheet ready to accept its pie-filling of feathers. And something even more appealing about sinking contentedly under it at the end of the day, knowing that one has done one's duty well.

Socks, on the other hand, were more problematic. Tangled socks are generally unruly, mismatched, grumpy things.  To bring a tangle of socks under control takes time and systematic thinking.  Balling up tiny piles of tricot-edged baby socks alongside a larger pile of men's black socks might initially seem a quaint domestic chore of any evening. But when the tangled mass started to grow into boys' socks, girls', babies' and men's, the nightly task became overwhelming.  You see, one needs a very large space to sort, pair and ball; and the arm of the sofa was not up to it.

Systems need strategy, and when a system fails, then the strategy need a review.  I purchased three plastic baskets, and labelled each with its child owner's name.  At least then I could balance them on eh chair arm whilst untangling, pairing, and watching television. (I was tempted to write 'whilst reading' but we all know that would be both unlikely and pretentious, don't we?).

The novelty of the new system worked effectively, with proud husband smiling benignly at his wifelet's ingenuity and organisational skill.  Happy man to be able to leave the house of a morning, confident that the children's feet, at least, were well-managed, that the baby wouldn't be dropped by a gin-soaked mother or the children left unfed.

Gradually, as the children developed and their sock repertoires expanded, the task of sorting, pairing, balling again became tedious.  By then the break for both their freedom and mine had started.  As our separations began, at first, they were pleased to seek and find their own socks, to pair and ball and drop them into their baskets. Even if the basket contents were never quite decanted into drawers. But dissension soon arises in the passionate, besting breasts of pre-pubescent teens. And I'll tell you a secret, it arises in the passionate beating breasts of their parents too.  The three little sock baskets were redundant.

The heroine of this story (me, and she was a heroine too for even caring about the laundry) conducted another strategic review. To say I actually calculated how many hours of my remaining time on earth might be swallowed by sorting, pairing and balling my family's socks would be an exaggeration. What I did instead was an act of outright rebellion. Without consultation or even mention on the agenda of the next family meeting (yes, really - try it, it's hilarious to read the minutes years later), I went right out and bought ONE LARGE SOCK BASKET.  From then on, if anyone wanted a matching pair of clean socks they knew where to find them. The morning scramble through the basket secretly amused me as I watched yet another piece of my children's puzzlement click into place, and I'm pretty sure they never caught me smirking, not even furious eldest.

To this day the sock basket exists.  Over the years as the family has contracted, and expanded and with each arrival and departure, the basket acquires more odd socks; some not even ours. I still pull out the one soft white tennis sock with grey trim and remember the girl who threw my child's clothing out of her  bedroom window at three in the morning.  There was a lesson that badly needed learning.

There in a new year, one ending in a five which makes it feel special and so it is. It marks a change and another strategic review. A bit of life-cleansing the mindfulness police are suggesting. So I may just take some time out of my seasonal fever to throw away the odd socks, detox the basket, down-size the tangled bondage that stands between me and my goal of morning-clean socks and start the new year lighter for it.  All except for the soft white tennis sock with the grey trim.  There are some lessons only another woman can teach a mother's son. 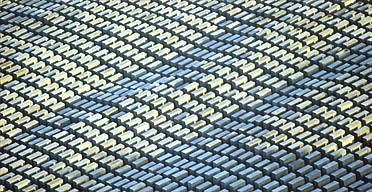 'It happened, therefore it can happen again: this is the core of what we have to say.'
Primo Levi

This picture and quotation sits above my desk; it will never be removed because it reminds me how easily we could fall prey to beguiling words and economic imperatives. Sometimes, maybe, we could forget too that we are all simply human.

Music? Of course it could only be The Killers, but later...