Love song for a human 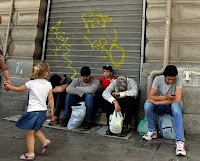 A young man knocked on my door. He had a card. It said he was disabled. He wanted to sell me a tea towel I didn’t want. It was expensive. I had little money but I believed his story so I bought it. Later I read about men who drove groups of youngsters into suburban areas to exploit the easy kindness of the well-off. I felt cheated of my money but not my compassion.

The next time a young man came to my door with a card saying he was disabled I did not buy a tea towel. I would not be duped a second time. I sent him away with a lie, saying I did not need anything. I kept my money but I lost my sense of honesty. I felt uneasy.

The time after that another young man came selling tea towels. With a card saying he was disabled. He bounced a basket ball on my doorstep. I felt cross. He looked young and fit. He seemed as uninterested in selling the tea towel as I was in buying it. He seemed to want something else. I didn’t want his tea towel. I told him to go. I kept my money that day and gained a fear. Of needy young men  coming to my door.

Posted by Primavera at 16:50 No comments: