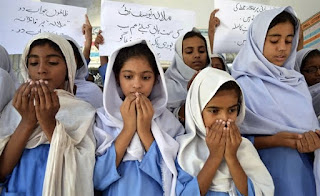 In a week when a 14 year old girl is shot in the head by a grown man for promoting female education, in the UK more revelations emerge from abused women who didn't have a voice less than 40 years ago.

It’s interesting to note how ‘unsurprised’ many people are about these recent cases; how conclusively collusive silence muffles victims’ voices.  But in the Swat Valley 14 year old Malala had a voice; she wrote.  She was that most dangerous of creatures, a new women writing.  At 11, when she started her blog, her liminality protected her.  With approaching womanhood, her voice jeopardised her as fear of her potential power threatened the ignorant around her.

There’s a 16 year old girl in the north who’s afraid of the power of her own voice but through support she is moving towards confronting her demons. I hope she makes it, she deserves to.  She’s kind and intelligent, full of wit but terrified of becoming a woman.  Why? Because she’s had first-hand experience of seeing one particular woman’s condition, her lack of agency; locked-in syndrome of the domestic variety.  What would recommend womanhood to a girl who’s witnessed these things, a girl who’s too bright for her own good, a thinking girl, an analyst?

I hope Malala makes it with enough of herself to carry on. I hope A makes it by finding out there’s another way to be.  I don’t know what to hope for the many victims of sexual abuse, male and female, throughout history but I know this.  As we walk through our days, we are surrounded with them holding their secrets in lest anyone should judge them as harshly as they judge themselves.

Looking back on those decades which allowed Haut de la Garenne, the transportation of children, who in turn were abused and countless other revelations, the only surprise is that it’s taken this long to emerge.  How well I remember the sense of freedom that magazines like ‘Cosmopolitan’ offered to our tender coming of age with the advent of reliable contraception.  Finally, women were free from the fear of pregnancy and could enjoy unfettered sexual freedom.  Really? As quickly as that?

The other day, what appeared to be an amusing encounter in a lift aptly summarises what contributes towards silent disempowerment.   Early morning in the lift going up to my office, one male companion cheerful and communicative.  Lift stops, a man and woman get in.  Woman is carrying a green plastic box under her arm labelled ‘Orthodox Christianity’.

I take a risk; make eye contact, smile.  Then to explain my boldness, intrigued at the charming absurdity of being able to carry an entire religion, and all that goes with it, under her arm.  She gets it but seems unimpressed. A shrug as if to say, ‘this? it’s nothing’. Cheerful male companion picks it up.  He’s already been charming enough to hold open the security door for me so we’ve bonded in human spirit.  ‘Don’t lose it’, he says laconically.

The fourth person joins in.  His timing is a little quick as if he’s amused himself with his observation and has to get it out before the lift stops.  ‘Wonder what colour box Islam is in?’  It’s good, it’s contributing, just.  But he can’t leave it and continues by describing an office scene, with dialogue,  to do with what coloured box will be chosen according to its religion.  Then he muses on appropriate colours.  He has appropriated the potential power of that encounter.

To paraphrase Nietzsche, a joke is an epigram on the death of a feeling. The encounter was good; four people interacted, spoke their thoughts and then went separate ways.   I am an older woman now, getting older still next week, so maybe it’s ok to have a voice, to engage people with it.  No bullet in the head for the old.  We fall into the sphere of desiccated experience along with coconuts.  Is women’s fecundity so powerful that it requires entire religious and socio-political systems to control it?  To be a victim is a terrible thing but to live in so much ignorance and fear that that these pernicious systems are your only form of empowerment must be so much worse.  Is it Islam, Orthodox Christianity or something else that strikes you about the photograph on this post?  I’m not sure where one religion ends and another one begins but one thing I know, it’s not women who are man’s enemy or custodians of their comfort.  Both men and women need to find their voice and protest at cruel and devisive structures that prevent all of us becoming who we really are.

This is for two young people who know who they are and what they've got.

Posted by Primavera at 12:53 No comments:

Only because it's National Poetry Day... and because putting together Poison and Wine by the Civil Wars change these lines to a place where I used to be once.

Care how you drink
Exclusively, desperately
Thirst that won’t be quenched
By wine, by time

Posted by Primavera at 18:44 No comments: