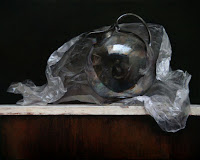 It was inevitable that eventually I would turn to see how women have been portrayed by women and was delighted to find a contemporary blog that treats the subject: http://womenpaintingwomen.blogspot.com/ Inspired by a discussion on how female figurative artists are approaching women as subjects, the blog was started by Sadie J Valeri, a classical realist oil painter and here’s a desirable example of her work. Enlarge the image to see the artist's reflection.

With glee then I dived into the site to find an almost unremitting landscape of female representation in virtually lifeless forms - alternately looking down, gazing into the middle distance - less enigmatic than dull.

A few beacons of hope on this dismal horizon showed subjects actually doing something but it really was enough to stall that line of enquiry until I was directed to Louise Bourgeois.

Anger, betrayal and jealousy – now at least these are emotions we can do something with, and a thirty foot spider made of steel and marble called Maman – great. Even greater is a person in her nineties engaged with themes that obsess her still. And still producing, albeit in textiles easier on old fingers. Look at the energy in her image in this photograph by Annie Leibovitz.

The things that hand has created, the life this woman has led - 'From traumatized childhood to fierce old age’- so what if she doesn’t always tell the truth about her life. People like this can spin their own webs and in doing so can beguile us.

People then can make their lives if they persist - “A woman has no peace as an artist until she proves over and over that she won’t be eliminated” said Bourgeois. She also said, “My best friend was my mother and she was deliberate, clever, patient, soothing, reasonable, dainty, subtle, indispensable, neat and as useful as a spider… I shall never tire of representing her.”

I cannot represent my mother but I can remember how much she enjoys the old songs from her young days so here she is my little mother, whose face I can never tire of seeing and here is a song, per te mama... 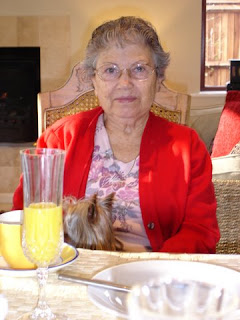 See how nervously Darren Hayes glances at the great one - pure sentimental joy - and where did all those little Chinese children come from?