The indistinct line between art and life

Now I wasn’t going to write about these pictures because research into the artist’s life brought on an attack of anathema. But notwithstanding the debate about separation between artist and work, I’d already started an unstoppable train of thought when another stimulus came - the link was a gift so here goes and let’s see where it gets us.

I thought Malliol must have loved women in order to portray them the way he did but maybe Schiele understood them in a different way. Possibly relationships based on power rather than love. 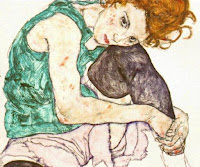 First a portrait of Wally (do hope it is Wally because that’s what I imagine she’s like). Poor Wally, a victim of her love, was passed over for Schiele’s respectable marriage. Better she had been passed over, Schiele attempted to append her to it – promising her an annual holiday for the two of them. How enticing. Brings me to The Unbearable Lightness of Being where Franz only makes love to his mistress in another country – he consequently goes on a lot of academic conferences. But that’s another story for another d

ay.
So, Wally, what are you telling us? Lovely Wally looks boxed in rather like Naomi Wolf’s book cover for The Beauty Myth. So confined, so silent, so introspective. What would Wally say, if she could, about life with Schiele?
What inner self is she protecting, what secrets are hers alone?

Would she wonder why he filled his life with a melange of bruised and damaged, vulnerable young girls?

How can we imagine all this from just looking at that image? She may have been happy as Schiele's mistress. That she told him what he could do with his part-time proposition, however, tells us otherwise so maybe this current interpretation of her supposed image is not so fanciful.
Jeanette Winterson, in her 2002 lecture ‘What is Art For’ claims that art can awaken us to truths about ourselves and our lives.’ The separation then between the work and the artist can be seen as being affected by how the work ‘brings us back to consciousness, sometimes quietly, sometimes dramatically, but the responsibility to act on what we find is ours’. Therefore art is made out of ‘a passionate, reckless love of the work in its own right, as though nothing else exists and an imaginative force that creates something new out of disparate material. She goes on to say that in art there is a terror ‘that there might be a different way to live’, a celebration of the human spirit but, I would argue there is also the possiblity that we are forced to see something that we have preferred to ignore.
But before this post declines into despair, this never fails to revive my belief in humankind:
Posted by Primavera at 19:00