Continuing the prosumer / Prometheus allegory, with a frisson of Carmen thrown in, consider these portrayals as notions of choice. To what extent are choices externally imposed or internally selected? How much of ourselves are we truly in control of?

After all, humans have a propensity to rationalisation, the need to feel that they are in control of their destiny, however futile that might be. Even in error people will post-rationalise their decisions to salvage something.

But in this exhausting era of positive thinking, I’m finding it incredibly difficult to think that being buried alive in Haiti is going to, in any way, add up to some sentimental notion of it all being for the best, in this best of all possible worlds. And yet, incredibly, I recently heard someone propound that these folk are so poor - only eating one meal a day - that their bodies have the ability to better withstand incarceration underground.

Back to Prometheus, choice and whether we are really prosumers or just consuming life in a different way. 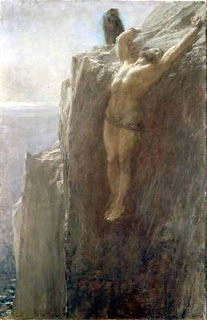 Consider Briton Riviere’s 1889 Prometheus. Notwithstanding the obvious proximity of the poor man’s genitals to his liver (glad that’s out of the way), here surely is a portrayal of man vulnerable, totally exposed, not for a moment seeming in control of his destiny. He stole the fire and got caught. 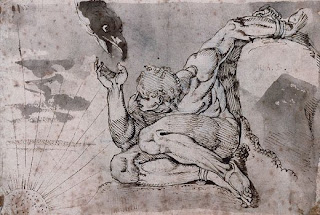 bound but he is certainly not portrayed as vulnerable. With his powerful musculature and scant restraint, he looks more than a match for that blunted beak. Actually he seems to be offering his visitor a tasty morsel. Here surely is a man protecting himself, only offering what he is prepared to give. He made a contract when he stole the fire.

I think Fuseli made choices in his life whereas poor old Riviere, steeped in the privileges of the institute, had them made for him. As a metaphor then for prosumerism, there will be those who make their own stories and those who will have them made by others. God bless the child that’s got his own.