In the construction of this blog I have been greatly exercised with how it looks. Is it clean, pleasing to the eye? Do the words work with the pictures? Will the music co-ordinate well with the thought? This preoccupation with appearance takes me straight to a guilty place where a voice says, ‘those who are concerned with appearance are foolish, shallow and vain.’ Perhaps that voice could lessen the sting of its message by amendment: ‘those who are solely concerned with appearance… ‘. So I construct a place to seek refuge for my foolishness and vanity…

Media images are being rushed out to show the suffering of the people of Haiti, especially the children, and old philosophies are being invoked to talk about the earthquake in different ways. Do you suppose the poor folk stunned by this catastrophe are interested in how they’re being portrayed around the world? Probably not, they have other things on their minds right now. 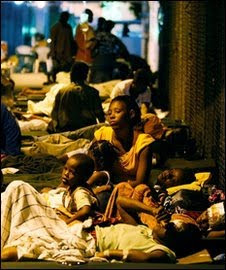 But look at this photograph. Is it not beautiful even as it purports to portray agony? I struggle with my desire to look again and again at this photograph. I struggle because I cannot avert my eyes to give these people some dignity. After all this time, and after all I’ve learnt, my western eyes are still gazing frankly on their beauty and their suffering.

There is subjectivity, in Kant’s view, in focusing upon an object’s aesthetic qualities (rooted in personal feelings of pleasure and pain) but also ‘a kind of objectivity on the grounds that, at the purely aesthetic level, feelings of pleasure and pain are universal responses.’ While the notion of universality is flawed because there is no guarantee that this photograph will have the same meaning in different cultures, I challenge any onlooker not to see the quiet dignity in the central woman’s face and to hope for her.
Posted by Primavera at 21:05