A thousand shadows, a single fire 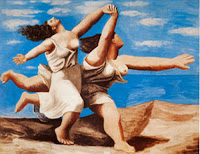 I thought I'd have some fun today, and this is meant to be playful simply because Charlotte Raven is looking back 'in shame at the 1990s when her generation turned its back on feminism'. And that is a subject close to my heart, not least because I have daughters and a son. We people have, want to, live together, hopefully harmoniously.

A blog post, at least mine, is no place to treat such a complex subject so the only thing to do is signal the importance of being 'angry in the right measure' and understand that for some women, feminism is a luxury.

ve something to replace them with. We need to understand what webs people are in the centre of, how hard they fought to get there and what compromises they made along the way. Inevitably this brings back the notion of choice and how active or passive we are in the process but let's get on. (Check out Louise Bourgeois' Maman in the meantime.)

In 1963, Leonard Cohen published, what is described as 'his lyrical first novel'; The Favourite Game, in which he writes:

A thousand shadows, a single fire, everything that happened, twisted by telling, served the vision, and when he saw it, he was in the very center of things.
...
One day what he did to her, to the child, would enter his understanding with such a smash of guilt that he would sit motionless for days, until others carried him and medical machines brought him back to speech. But that was not today.

I hope Mr Cohen will forgive me for appropriating his text as a metaphor for unconscious patriarchy, after all it was 1963, but it demonstrates, for me at least, the difficulty of cultural change, the length of time it takes, the setbacks and, sometimes, the sheer impossibility of knowing exactly what web we're weaving at any given time - where the true heart is, 'pumping stability and erections and orgasms and sleep into all the withering commercial limbs'.

It is only fitting that, having exploited his text, I finish off my cultural raid by posting this lovely 1972 version of Mr C's song to accompany the joyful 1922 painting by Picasso...